Posted By: (Femi)-https://www.linkedin.com/profile/view?id=11857187&trk=nav_responsive_tab_profileon: May 24, 2015In: Super EaglesNo Comments
Print Email

Coach Stephen Keshi has invited goalkeeper and skipper Vincent Enyeama and 14 other overseas –based professionals for next month’s 2017 Africa Cup of Nations qualifying match against Chad in Kaduna.

New faces William Troost-Ekong, a defender based in The Netherlands, Kingsley Madu of AS Trencin in Slovakia and Portugal –based Anderson Esiti complete the list.

Meanwhile, Coach Keshi alongside his assistants, the backroom staff and 20 home –based professionals on Sunday arrived in Katsina for Tuesday’s commemorative match against Nigeria National League side, Spotlight FC. 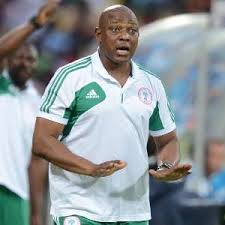 Spotlight FC, which is in the Round of 32 of this year’s Federation Cup competition after defeating Idah United FC in the Round of 64, will try the Super Eagles B for strength as part of activities marking the commissioning of the brand –new, 35,000 –seater Karkanda Stadium located in the capital city.