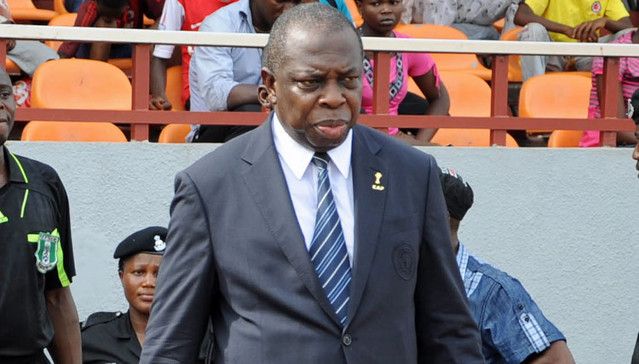 CAF General Coordinator, Mr. Paul Bassey, has passionately appealed to the Government and generality of Nigerians to give support to the Amaju Pinnick –led Nigeria Football Federation, including the reforms being embarked upon by the administration, so far with remarkable success.

FIFA Match Commissioner Bassey, indisputably one of Nigeria’s real and active leading figures in world football, spoke at the weekend against the backdrop of improved reckoning of Nigeria by the world football community and credible steps taken by the 11 –month old Pinnick Board.

“We must begin to assess the impact of the new NFF administration in real terms, and I am of the firm opinion that the recent appointment of Pinnick as Member of Organizing Committee for the FIFA U-20 World Cup is the latest acknowledgement by world football that the new NFF is projecting Nigeria football very well internationally.

“I look at the reforms being embarked upon by the Pinnick administration, and I see the need for Government and every Nigerian to support this team and these reforms, because they are in the interest of our country’s football,” said Bassey.

At the advent of the administration, the Pinnick team embarked on capacity –building programs, part of which has led to improved officiating and attendant credibility of League matches, and also saw Nigerian referees gaining in reckoning with FIFA and CAF. Nigeria’s Jelili Ogunmuyiwa was the referee for the final of the 2015 African Beach Soccer Championship in Seychelles, and was one of only three African referees at July’s FIFA Beach Soccer World Cup in Portugal.

A number of coaches have also improved their knowledge through these programs, with some now competent in match –reading analysis, using the ProZone software.

On the field, Nigeria won the African Women Championship title in Namibia in October 2014, won the African Youth Championship in Senegal in March, qualified for the men’s and women’s football tournament of the All-Africa Games (erasing unsavoury memories of the last edition), and there’s a rebirth on the Super Eagles’ technical bench, while the U-23 team remains in contention for a place at next year’s Olympics. Pinnick with Blatter at Home of FIFA. Pinnick at a Super Eagles’ match 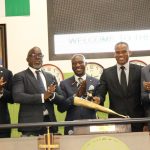 Pinnick and NFF leadership with Oliseh at the NSE.

On a personal level, Pinnick, who was Chairman of Delta State Football Association for eight years and also served as Executive Chairman of the Delta State Sports Commission, has met severally with CAF President Issa Hayatou and FIFA President Sepp Blatter, and also with FA chairman Greg Dyke and the UK High Commission in Nigeria, among others.

“I can see a lot of passion in what they are doing. There is synergy between the NFF and the LMC and this is good for Nigeria football. For the first time ever, they got the Nigeria Stock Exchange to welcome a football figure to sound the closing gong on the floor of the NSE. They are also committed to transparency and accountability, which is why they are working with world –renowned firms like Pricewaterhouse Coopers, Bain & Co and Financial Derivatives.

“In the boardroom, you see a young, energetic and dynamic team deliberating and coming up with great ideas for the development of the Nigeria game, and the secretariat also makes flawless arrangements for our team’s travels for international matches and competitions. The committees are also allowed to function properly.

“They are not there yet, but they need our support and they will get there. I believe they have the capacity to deliver. Corporate Nigeria should assess their scorecard so far and wade in with greater support for Nigeria football,” Bassey, also a CAF Instructor on Club Licensing, concluded.