Super Eagles’ Head Coach, Sunday Oliseh, will return to the country next week, as preparations hit top gear for next month’s 2017 Africa Cup of Nations qualifying match against Tanzania in Dar es Salaam.

The former Super Eagles’ captain is presently in the United Kingdom with his assistant, Jean Francois Loscuito, and a number of meetings with senior Nigerian internationals in that country are on -going.

Oliseh, officially presented on July 15, has assured that he is already working assiduously towards raising a solid squad to pick up three vital points from East Africa in four-and-half weeks’ time.

“The match in Dar es Salaam is very, very crucial, not only because it will be my first match as Head Coach, but also because we have no choice other than to win. The three points are important for us to keep up the tempo in our group. 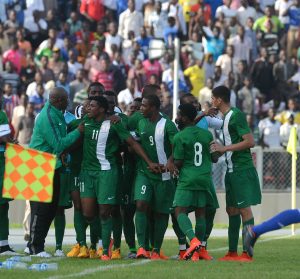 “We are on the same three points with Egypt, though they have scored a goal more. That is why we cannot afford any slip along the way. We will deal first with the match in Tanzania, and then we will start thinking about the CHAN qualifiers with Burkina Faso in October, and then the FIFA World Cup qualifying fixture in November. There is a lot of work. After these matches, we will now start working towards the two AFCON qualifying matches we have with the Pharaohs in March next year.”

Oliseh, in company with NFF President Amaju Pinnick, will also be involved in a number of sessions with some corporate groups interested in partnering with Nigeria football.

“We will spread our dragnet far and wide, and any player who is in great form and we believe can add value to the Super Eagles will be invited to fight for shirt to represent Nigeria.”

The Super Eagles play Tanzania at the National Stadium, Dar es Salaam on Saturday, 5th September, with an international friendly to fulfill a few days later.