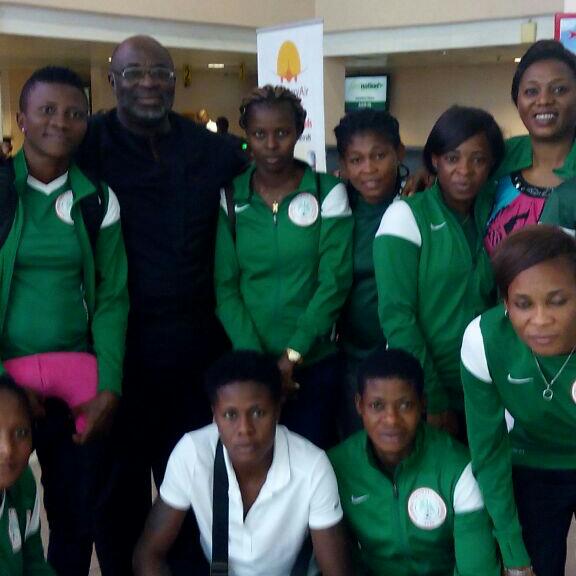 NFF 1st VP, Seyi Akinwunmi with the players on arrival in Lagos

The Super Falcons have returned to Abuja following elimination from the 2016 Olympics qualifying race by Equatorial Guinea in Bata on Sunday.

Coach Chris Danjuma has immediately announced a one-week break for the Super Falcons, ahead of re-grouping for preparations for the Women’s Football Tournament of the 11th All-Africa Games in Congo-Brazzaville early next month.

NFF 1st Vice President, Barrister Seyi Akinwunmi received the Falcons in Lagos, and told players and officials that though the Nigeria Football Federation and the Nigeria football family feel sad about their elimination, plans by the NFF to boost the women’s game in Nigeria remain unaffected. The Falcons at a training session in Bata 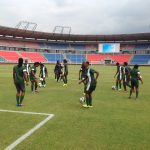 Still at training session in Bata 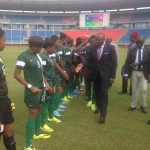 Falcons meet the guest of honour before the match 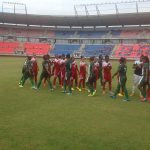 The Falcons and their Equatorial Guinean counterparts familiarize before kick-off NFF 1st VP, Seyi Akinwunmi with the players on arrival in Lagos “You have been eliminated from the Olympics race, but don’t forget that the All-Africa Games is next month, and also the qualifiers for the 2016 African Women Championship in Cameroon, for which you are the defending champions, will soon start.

“So, there is no time to remain sad and demoralized. You have to forget the experience in Bata and concentrate on the challenges ahead. The NFF is there to give you all the necessary support.”

The Falcons lost 1-2 in extra time, after both legs of the fixture ended 1-1. It means Equatorial Guinea will now play South Africa, and Cameroon will play Cote d’Ivoire for Africa’s two tickets to the Women’s Football Tournament of next year’s Olympics in Rio de Janeiro, Brazil.