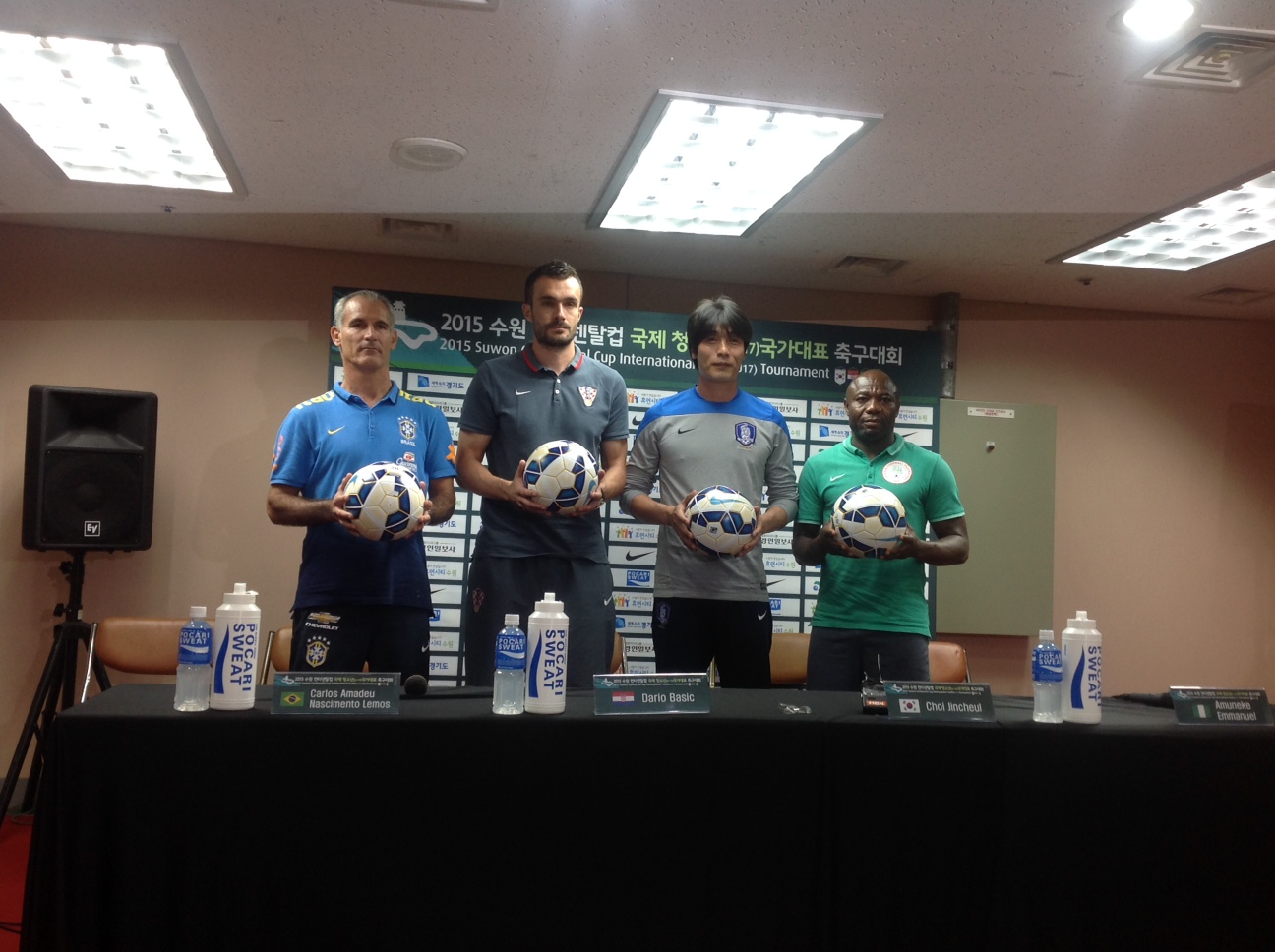 Amuneke (right) with other Head Coaches at the Suwon Youth Tournament

Dr. Emmanuel Ikpeme, Deputy Secretary General at the Nigeria Football
Federation(NFF) has commended the Golden Eaglets for their hard-fought
1-1 draw against Korea at the 2015 Suwon Continental Cup International
Youth (U-17) Football Tournament.
Ikpeme arrived Suwon in time on Wednesday and was on hand to see the
Emmanuel Amuneke-led side battle the hosts to a standstill in front
of their fans at the Suwon World Cup Stadium. Speaking to the team
afterwards, Ikpeme said he was pleased with the team’s fighting spirit
and drive despite playing their first match barely 24 hours after
arriving Suwon.
” Of course, you can do better in your next game but we must commend
you because this is the first big test for some of you,” Ikpeme, a
trained psychologist told the players.
The Eaglets were in Suwon with just six of the 21 players that
secured the team’s Chile 2015 World Cup ticket with the remaining 12
players picked from recent screening exercise.
Said Ikpeme: “Though, this was the first time you are playing a top
game especially against a team like Korea who has been on ground, it
is never going to be excuse because Nigerians expect you to do well as
the defending champions.
” The match against Brazil is going to be tougher but you can always
get better against Brazil,” he noted.
Ikpeme’s sentiment was echoed to the players by Amuneke at Thursday’s
training with the former African Footballer of the Year admonishing
his wards to step up their game in subsequent matches.
He said: “I want to commend all of you because there were doubts about
what you can do before we came here but we have to be focussed
especially against Brazil on Friday.
“Of course, Brazil would be a tougher match but that can only be
possible if you allow them to play,” explained Amuneke with a dossier
on the Brazilian team.
“We need power, skill and coordination against Brazil and if you do
what is needed, we won’t have much problem on Friday,”
Nwakali’s arrival boost Eaglets against Brazil
Nigeria’s U-17 side, Golden Eaglets would on Friday have the
complement of their mercurial captain Kelechi Nwakali in their second
match against Brazil at the 2015 Suwon Continental Cup International
Youth (U-17) Football Tournament.