NFF President Amaju Pinnick refused to be despondent following Saturday’s 0-0 draw between the Super Eagles and Taifa Stars of Tanzania. Rather, he saw a lot of positives in the result and has called on Nigerians from far and near to exercise patience as new Head Coach Sunday Oliseh gradually steadies his ship.

Nigeria were expected to take three points away from Dar es Salaam on Saturday, but came away with a point as the race to the 2017 Africa Cup of Nations finals in Gabon gathered steam. Even with the draw, Pinnick remains confident the Eagles will get there. 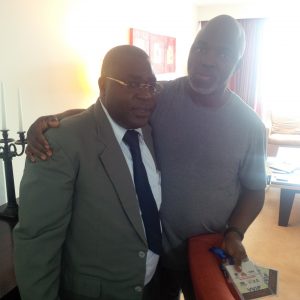 “It was a good match in the sense that Oliseh has now seen his first set of players, and he has seen the good and the bad ones. If we had been able to play a friendly match before this game, he would certainly have had greater knowledge of each and everyone of his players.

“However, a lot of lessons have been learnt here. The Coach himself would have wanted so much to win, but that is football. I believe the team will get better as we go along.”

Pinnick called on football –passionate Nigerians to remain in solid support of Oliseh as the NFF intends to organize several friendly games to engender bonding among the new players and entrench cohesion and telepathy.

“On our part, we will do our best to arrange a lot of friendly games for the team. I believe the team will be better against Niger Republic in Port Harcourt on Tuesday.

“When you are rebuilding, you have to exercise patience because you have to bring in and take out as the process requires.”

The NFF President hailed the discipline and organization that he saw in the Eagles’ camp in Dar es Salaam.

“As we keep saying, it is not always only about winning. The building of a sustainable football culture is paramount in our administration’s programs. We want to win matches, but we also want to see attitude that projects the nation positively. I am happy with the discipline in the team camp and the organization.

“When there is discipline and dedication, and patriotism, the results will come,” added Pinnick, who pointed out that there were so many debutants in the Eagles’ team that drew in Dar es Salaam.

On a day that Mauritania spanked the Bafana Bafana of South Africa, Liberia beat Tunisia and South Sudan earned victory over Equatorial Guinea, the Super Eagles drew 0-0 with Tanzania and now have four points in the Gabon 2017 race.