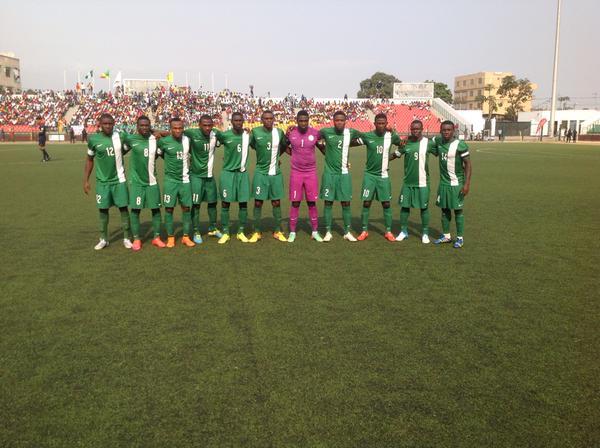 Dream Team just before the 'battle'

General Secretary of Nigeria Football Federation, Dr. Mohammed Sanusi has commended the output of the U-23 National Team in a 2-0 win over their Ghanaian counterparts at the All-Africa Games on Wednesday.

In the team’s first match of the Men’s Football Tournament of the Games as a result of the withdrawal of Egypt, the Dream Team lashed 1992 Olympics bronze medallists Ghana 2-0 at the Stade l’unite 3 in Brazzaville.

Ace forward Junior Ajayi, who hit two goals in the Olympics qualifying defeat of Congo-Brazzaville in Port Harcourt in July, scored Nigeria’s first goal in the 54th minute. Enyimba FC midfielder Kingsley Sokari, who played for the Flying Eagles at the FIFA U-20 World Cup in New Zealand in the summer, made the game safe for the Samson Siasia –led squad with four minutes to the end.

Sanusi, who is with the Dream Team and the Super Falcons in Brazzaville and watched the U-23 boys’ victory, said: “The U-23 boys played very well. They exhibited excellent cohesion and this is one National Team to be proud of.

“My charge to the team is to learn to take their chances. The scoreline would have been higher if they had not been profligate in front of goal. I believe the coaches will work on that aspect as the competition progresses.”

The Dream Team’s next match of the Games is against Senegal’s U-23, at the same Stade l’unite 3, on Saturday.