Head Coach of the U-23 National Team, Dream Team, Samson Siasia has expressed delight in the ability of his boys to fight hard and secure a draw against Senegal which took them to the top of Group B at the Men’s Football Tournament of the 11th All-Africa Games, on-going in Brazzaville, Congo.

Speaking after the game, Coach Siasia added that with this result, his focus is now on how to play the semi final opponents. 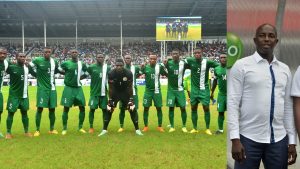 “My boys made me proud, I love their fighting spirit, to concede a goal that late and come back to equalize is a sign that the boys have a strong mentality. I must also commend Mustapha who was able to calm his nerves to score the equalizer. For now, let’s just go and savour our qualification for the semi finals, as this draw has made us to avoid the host nation (Congo), who would have been tough to play. I would prefer we play Congo in the final match.”

Assuring Nigerians that they won’t let down their guards, and would certainly go for gold, Siasia disclosed that for the semi final match, he will definitely make some changes to the squad.