Sunday starts his business on Saturday

Sunday Oliseh is upbeat as he starts life as Head Coach of the Super Eagles of Nigeria in a 2017 Africa Cup of Nations qualifier against Tanzania in Dar es Salaam.

“Am I under pressure? Pressure is relative. We want to go into the match and win, not that anyone is putting a sword at the back of our necks.

“I’m excited to have the opportunity to contribute as Head Coach, after having served my country as a player.”

The Africa Cup of Nations gold, silver and bronze winner spoke on Friday evening minutes after the Super Eagles had the official training at the National Stadium, Dar es Salaam, 24 hours before the clash with the Taifa Stars.

Just as it was when Sunday Oliseh was starting out as a player with the Super Eagles, a dozen years ago, Nigeria presently has a new group of Trojans to choose from.

The 23 players that Sunday Oliseh has brought to Dar es Salaam have an average age of slightly above 23, and nine of them have not played a single match for the three –time African champions previously. 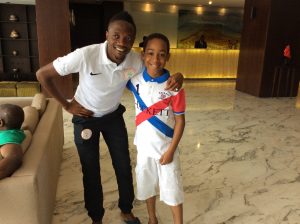 Young, dedicated and courageous, the spirit of the group was visible for all to see at the training session, with enthusiasm and invention in abundance.

Stand –in captain Ahmed Musa has been playing for the team for only five years, and has 51 caps. Goalkeepers Carl Ikeme, Femi Thomas and Ikechukwu Ezenwa have not played before, but one of them must start on Saturday. 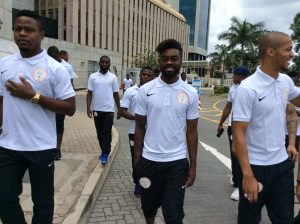 “We are here for business. We don’t want to know what others are doing; we are only interested in what we are doing. Of course, every team goes into a match to try and win.

“The three points are very crucial to us on Saturday. That is the only message ringing in the ears of the players,” added Sunday Oliseh.

A very lush turf at the National Stadium, Dar es Salaam appears ready for fireworks, with Tanzania Coach Charles Boniface Nwansa also keen to earn a win in order to be considered for the job on a permanent basis.

Yet, when both teams clashed in Dar es Salaam 35 years ago, in a FIFA World Cup qualifier, Nigeria won 2-0 thanks to first half goals by John Chidozie and Christian Nwokocha. Sunday Oliseh is keen to recreate that day come Saturday.