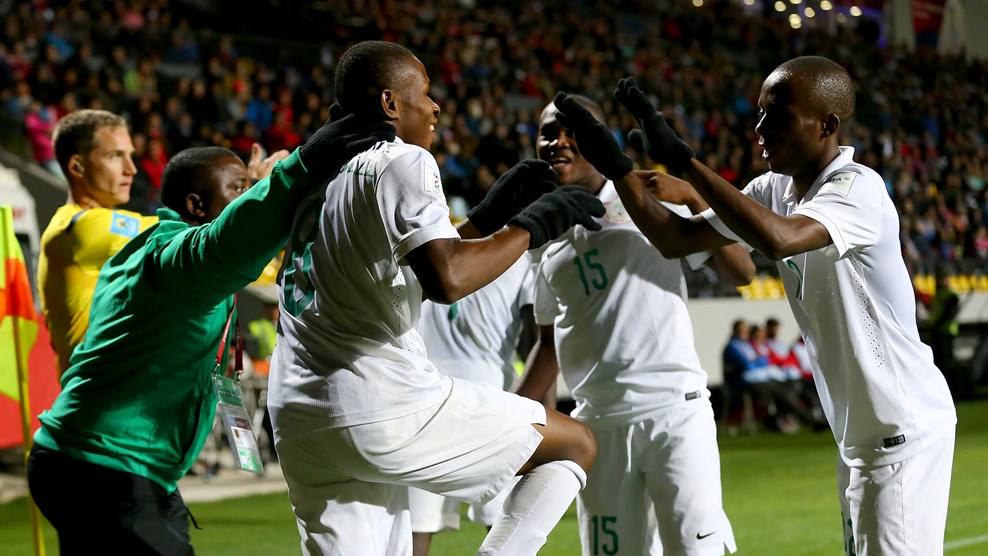 Nigeria’s U-17 trainer,  Emmanuel Amuneke has described Golden Eaglets win over Chile on Tuesday at the Sausalito Stadium in Vina de Mar as hard-won despite a crushing 5-1 scoreline. Striker Samuel Chukwueze and Victor Osimhen scored a brace with the other goal for captain Kelechi Nwakali who missed a penalty in the closing stages.

The result pushed Nigeria’s Eaglets to the top of Group A with the six maximum points following Saturday’s 2-0 victory over the USA and an express passage to the knockout stages. 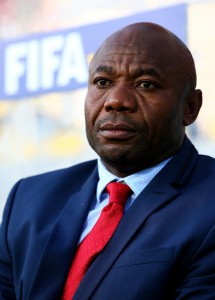 “This match against Chile was not an easy one despite the fact that we won 5-1 because we played against a very good team with good players,” Amuneke noted at the post match conference. He continued: “We knew they are a very good side and a very difficult team to play against because they have the full support of the crowd. But we were able to come up with the tactics to deal with their style and our players were able to interpret very well our plans for the game.”

The Eaglets’ supremo said it was his responsibility to keep the boys focus even after a very good performance against the host, adding that the next game against Croatia would not be easy.
“I think this is a peculiar group and the fact that Chile lost today doesn’t mean they are a bad side, they can still qualify from the group if they can get a good result in their last game against USA,”
he noted.

“We lost to Croatia at the pre-world Cup tournament in Suwon and we must respect them despite the fact that they have drawn their last two matches.”

Amuneke also commended the Local Organizing Committee (LOC) of FIFA U-17 World Cup Chile 2015.
Speaking at the Sausalito Stadium in Val de Mar, the former Barcelona winger said he was impressed so far with the organization of the tournament  adding, the Golden Eaglets have well been catered for
here. 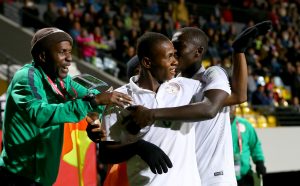 “We have enjoyed our time since we arrived in Santiago and I’m extremely happy to be here in Chile for good reasons because this is an important championship for the youths,” he said.”The Chilean people
are friendly which is good for football, FIFA and the organizers of
this tournament.”

Amuneke further said Chile 2015 was gradually living to the bill with the standard seen so far even as he predicted better days for the budding stars: “It would be the joy of all of us to see these young ones in the future and we can then look back at Chile 2015 and say this is where the story began.”

Meanwhile, Eaglets’ forward Samuel Chukwueze who scored the fastest goal at the on-going FIFA U-17 World Cup Chile 2015 with his 30 seconds opener in the 5-1 mauling of Chile on Tuesday has dedicated the goal to his adorable mum, Mrs. Chinyere Sarah Chukwueze. Chukwueze was Nigeria’s hero of the night after he scored a brace and earned three spot kicks out of which two were converted by Kelechi
Nwakali and Victor Osimhen, who also scored a brace. Nwakali missed the other Chukwueze-made penalty in the closing stages.

“I’m very happy to have scored twice today and I actually told my roommate (Joel Osikel) that I was going to score against Chile if I’m fielded and I’m so happy that I was able to do it, ” said the usually
taciturn Samuel, who admires Arjen Robben.“ The two goals are for my mum, a nurse who has been taking good care of me and my juniors (a brother and a sister) for about 16 years now; and I want to really thank her for being a good mother.”

Chukwueze has overtime shown he could be lethal in front of the goal post and was a star performer at the 2013 U-17 Iber Cup in Estoril, Portugal where he scored 12 goals in seven matches to emerge
as the top scorer.

“Our target  here at the World Cup is to win and I believe we can do better in our coming matches,” noted  Chukwueze, fondly nicknamed Sammy Rocko by friends.