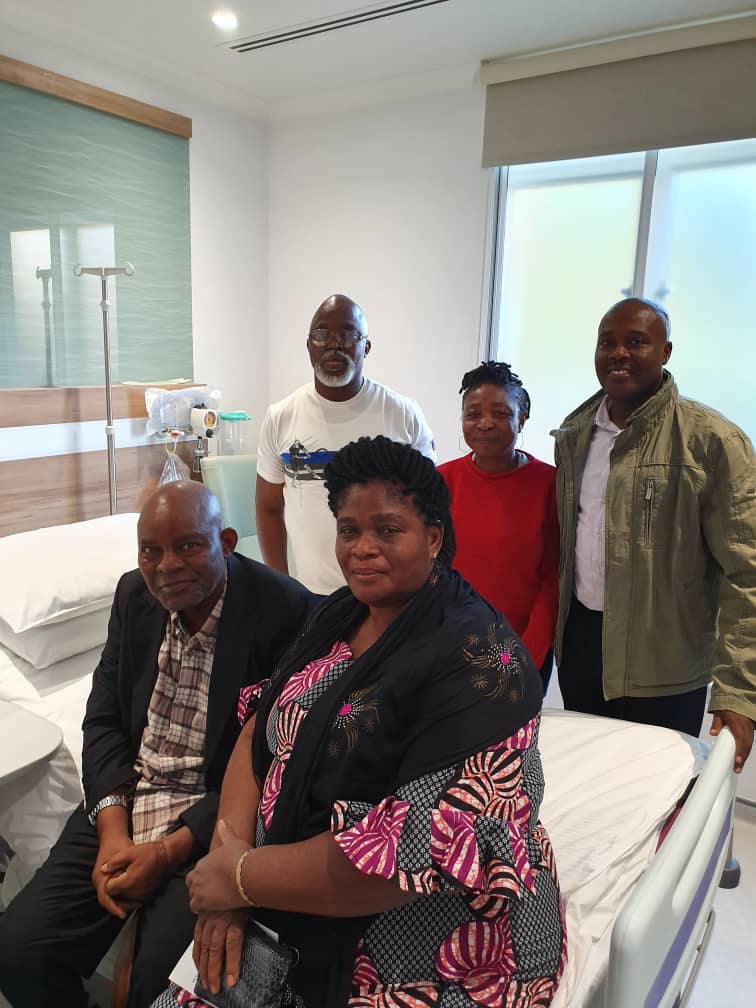 Former Nigeria captain Christian Chukwu, in company with his wife Lilian Nkeiruka, has arrived in the United Kingdom for medical treatment.

Chukwu, who captained the Senior National Team to win the Africa Cup of Nations for the first time in 1980, travelled with his wife aboard a Virgin Atlantic Airline flight from Lagos.

President of the Nigeria Football Federation, Mr. Amaju Melvin Pinnick, has arranged for an appointment for the Nigerian legend with a renown cardiologist in London.

“I am very happy with the efforts of the Nigeria Football Federation through the President, Mr. Amaju Melvin Pinnick. He has proved that he is truly father of Nigerian Football. I am also grateful for the support and prayers of other Nigerians.

Chukwu and wife were seen off at the Murtala Muhammed International Airport, Lagos by a Member of the NFF Executive Committee and Chairman of the Nigeria Women Football League, Aisha Falode and protocol officials of the NFF.

At the outbreak of news of the health challenges of the former defender, the NFF had moved immediately to ascertain the nature of his illness and to provide support, with Pinnick delegating the Chairman of Enugu State Football Association and Member of NFF Executive Committee, Hon. Chidi Ofo Okenwa to pay Chukwu a visit.

The Federation also sought financial support from philanthropic individuals, with the Chairman of Forte Oil, Mr. Femi Otedola weighing with $50,000.

Christian Chukwu captained the Green Eagles as they won Nigeria’s first –ever Africa Cup of Nations title in 1980, receiving the brand new Unity Cup from then President Shehu Shagari. He also captained the Enugu Rangers FC team that won the Africa Cup Winners’ Cup in 1977.

Nicknamed ‘Chairman’ for the authority he exuded as he marshalled the defence and launched onslaughts on the opposition defence for club and country, Chukwu also served as assistant coach of the first team to win a FIFA World Cup trophy for Nigeria – the Golden Eaglets that triumphed at the FIFA U16 World Cup in China in 1985.

He was also assistant coach of the team widely known as the Golden Generation – the 1994 Class of Super Eagles that qualified Nigeria for her first FIFA World Cup finals, won the Africa Cup of Nations title and reached the Round of 16 at the FIFA World Cup in America.

Between 2002 and 2005, Chukwu was head coach of the Super Eagles, leading the team to win bronze medal at the 2004 Africa Cup of Nations in Tunisia.