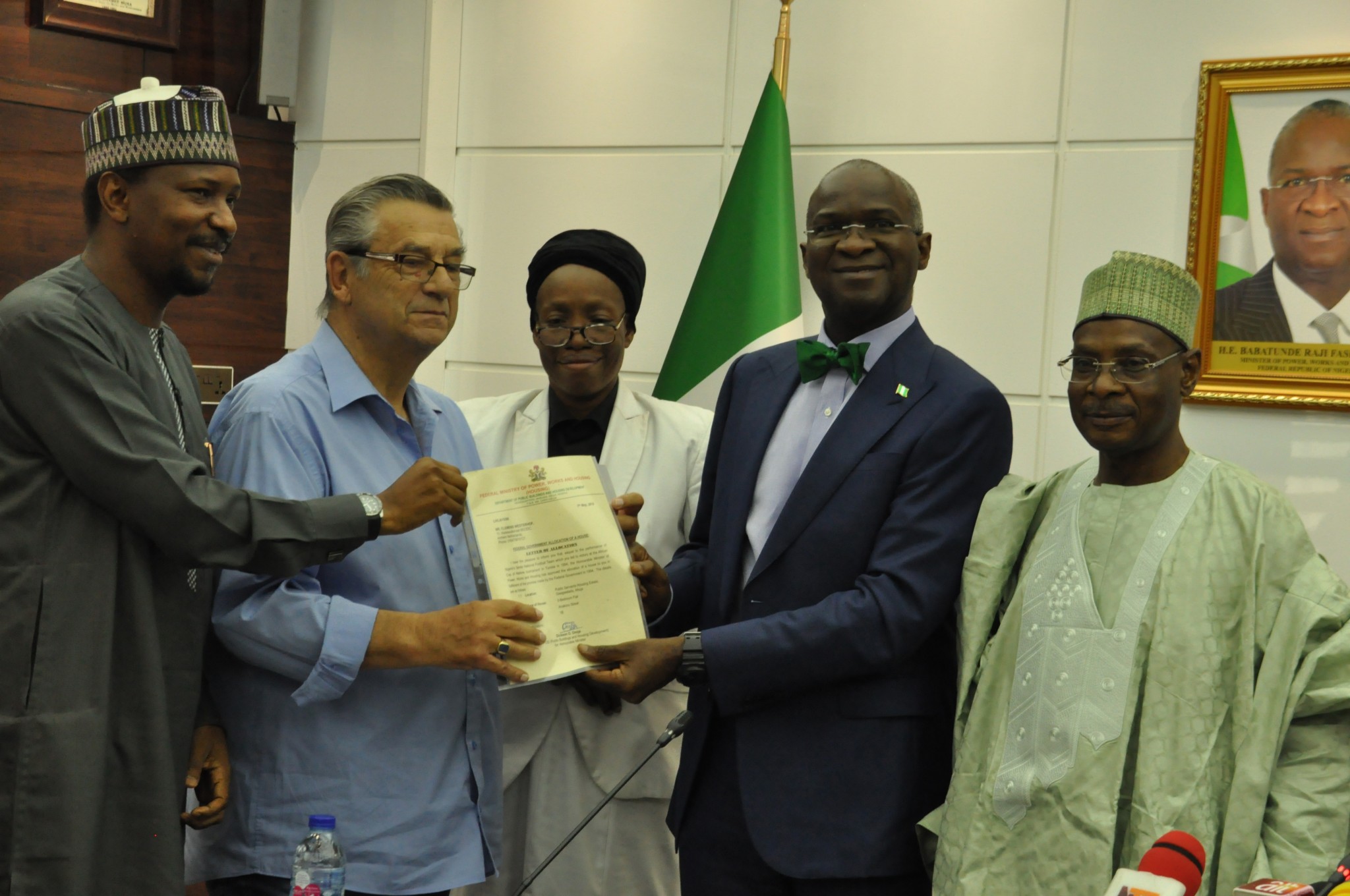 Posted By: Ben Stephenon: May 27, 2019In: NIgeria Football
Print Email

The Federal Government on Monday fulfilled a 25 –year pledge to former Technical Adviser of the Super Eagles, Mr. Clemens Westerhof.

At an impressive ceremony inside the conference room of the Federal Ministry of Power, Works and Housing, Abuja, the Honourable Minister, Mr. Babatunde Raji Fashola (SAN) said the occasion was a further proof that the Buhari administration was “committed to putting right the wrongs of yesterday and redressing all forms of yesterday’s injustice”.

Fashola, himself a first-grade football enthusiast, eulogized the virtues of football as a “great unifier, which does not bow to ethnic, religious or quota system considerations,” and hailed Westerhof for serving his time with Nigeria’s senior team with distinction, while apologizing on behalf of Nigeria that the pledge took 25 years to redeem.

“Mr. Westerhof ended our long –time search for a FIFA World Cup ticket, and afterwards went on to lead the team to Africa Cup of Nations glory. As a nation, we made promises, but there was no follow-up.

“I want the NFF to document those members of the squad that have not received their houses in the FCT as promised, and as soon as we receive this, we will respond positively. I was made aware that the promises had not been fulfilled through a letter by the assistant coach, Mr. Johannes Bonfrere, and we arranged for him to get his own in December 2017. Six months later, at the FIFA World Cup in Russia, a prominent journalist, Mr. Onochie Anibeze, brought it to my notice that the head coach, Mr. Westerhof was yet to receive his own house. We immediately initiated the process which has culminated in today’s event.”

Earlier, the Director of Public Building and Housing Development, Dickson Onoja had narrated the exploits of the Super Eagles’ Class of 1994, and how then military Head of State, Sani Abacha, hosted the team to a reception in Abuja after the AFCON triumph in Tunisia and promised each member of the team a house in Abuja.

Youth and Sports Minister, Barr. Solomon Dalung, who was represented by the Director of Federations and Elite Athletes Department, Mrs Tayo Oreweme, applauded the Ministry of Power, Works and Housing for fulfilling the pledge and referred to President Muhammadu Buhari’s 2015 fulfilment of his pledge to the world -conquering Golden Eaglets of 1985 (when he was military Head of State).

The 2nd Vice President of NFF, Mallam Shehu Dikko, who represented NFF President Amaju Pinnick at the occasion, praised the initiative of Mr. Fashola and his ministry, saying the redemption of the pledge was a positive sign to footballers and other sportsmen and women that promises would always be fulfilled, no matter how long it took.

“At the last NFF Football Awards in Lagos on 1st April, we honoured specially this Class of 1994 Super Eagles. Those of them that are still alive and in the country were brought to the event and celebrated. We wll compile a list of those who have not received their houses and revert back to the Ministry.”

An elated Westerhof, who flew into Nigeria from The Netherlands on Sunday night, said: “I am overjoyed. I want to thank the Nigerian Government for this, and I want to assure you that you will now see more of me in Nigeria.

“Nigeria is my second fatherland, and I am proud of what we were able to achieve with the players in those years. They were disciplined, dedicated and determined to lift Nigeria high, and we took Nigeria from 79th position to 5thin the world. I am thankful. However, I feel sad that some of my players have left us. May their souls rest in peace.”

Minister Fashola afterwards presented the letter of allocation of the house to Westerhof.