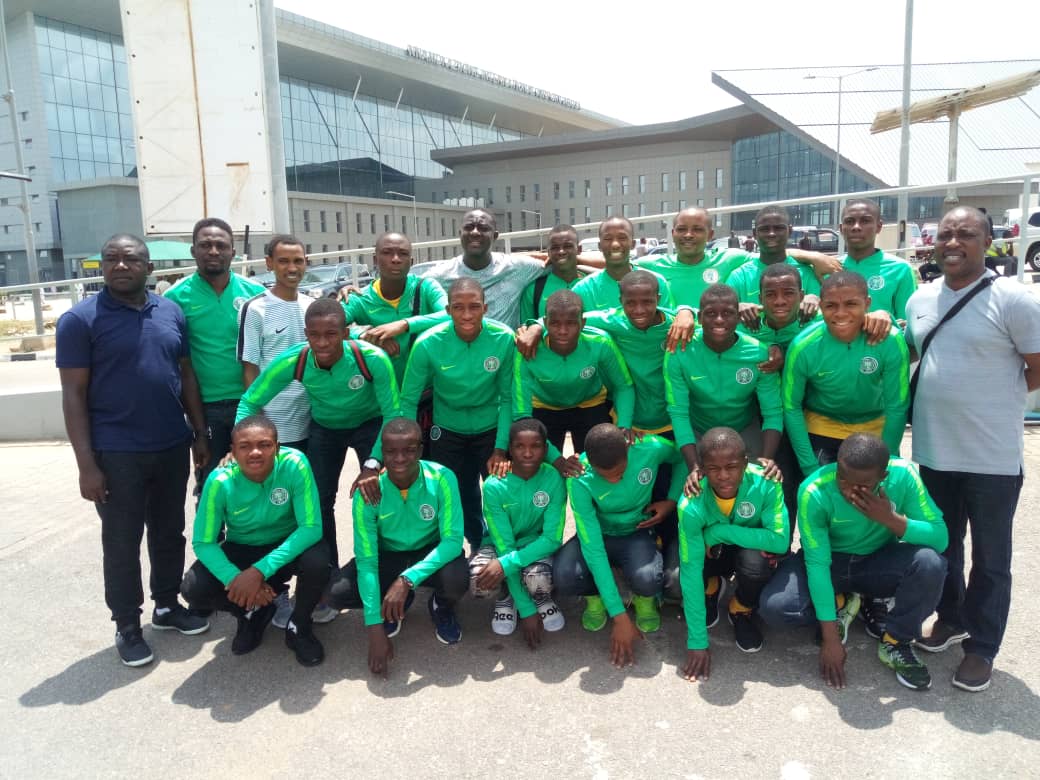 South West U13 Boys and South South U15 Boys have emerged champions in this year’s edition of Future Eagles U13 and U15 tournaments organized by the Nigeria Football Federation (NFF) sponsored by Zenith International Bank.

The three-day youth football event which was held at the Godswill Akpabio Stadium was concluded on Sunday night. The NFF Youth Football Committee headed by the NFF 1st Vice President, Barrister Seyi Akinwunmi introduced a new format for the two categories, with the positive implication that the League format ensured all the zones played more games compared to the previous editions.

The six geo-political zones produced two teams (U13 and U15) respectively for the championship to make it 12 teams that participated in the National finals after the Zonal events was held few months ago. Over 200 youth players featured in the tournaments.

“We found out that it breeds more competitiveness among the teams in every match and it helps the players to play more matches. For the first time all matches were played in one venue to implement this new format,” Akinwunmi told thenff.com.

“The objective is not only to ultimately identify and nurture the best Nigerian young players in the U13 and U15 categories each year, but also to encourage Boys Clubs and Academies to register with their respective State FAs in order to enable their players participate in this competition, to address the alleged scourge of age cheating, to expose the children to other cultures and teach them new social skills.

“We will not rest on our oars but instead continue to improve the program. We have this year invited the National U17 chief coach Manu Garba to witness the tournament, make his observations and give advice. We intend to include a female version of the program,  and have the trainers program and certification for our youth coaches which will take place prior to the next edition.

“I am impressed the tournament is getting more competitive, the adults are gaining more understanding about youth tournaments, there is more technical input at the U15 and the U13 levels and we have talented boys who can express themselves brilliantly in match situation. I was particularly impressed with the officiating by the young referees. I have a lot of hope for the future of football in Nigeria, and I want to appreciate the Akwa Ibom FA and the State Government for their efforts.”

South West U13 Boys spanked North Central U13 Boys 5-0 in the final game to finish top of the U13 event group with 15 points from five games, three points ahead of second-placed South South who finished second with 12 points. Light Chijioke’s hat-trick and two goals from Francis Ajibola and Oyedeji Segun sealed the title for the South West Boys.

The U15 final produced a photo-finish between South East U15 Boys and South South U15 Boys in the final game. Before the final game South East were top of the table with 12 points while South South had 10 points and placed second. First half of the encounter was cagey and ended goalless, but two quick second half goals from Isaac Ekom and Joseph Atie propelled the South South Boys to a 2-0 win in the final game, as they emerged champions in the U15 event with one point ahead of South East.

Officials of Zenith Bank led by Assistant General Manager and Akwa Ibom Zonal Head, Mr Asuquo Ita were impressed by the performance of the boys as the two final matches recorded seven goals. Mr Ita, who took the official kickoff and was honoured to meet with the players of the four teams, presented the medals and trophy to the winners and applauded the idea behind the Future Eagles project while commending the Federation.

“We are impressed with the level of football development at this grassroots stage and the abundant of work the NFF has put into organizing this amazing programs for youth football. I am a lover of football and I do follow all Nigeria national teams, we are happy to associate with football at this grassroots level and we’ll continue to work with the NFFto improve the project yearly. Obviously, there are talents in this country and it’s important we create an environment for competition and exposure for the kids to explore,” Ita told thenff.com.