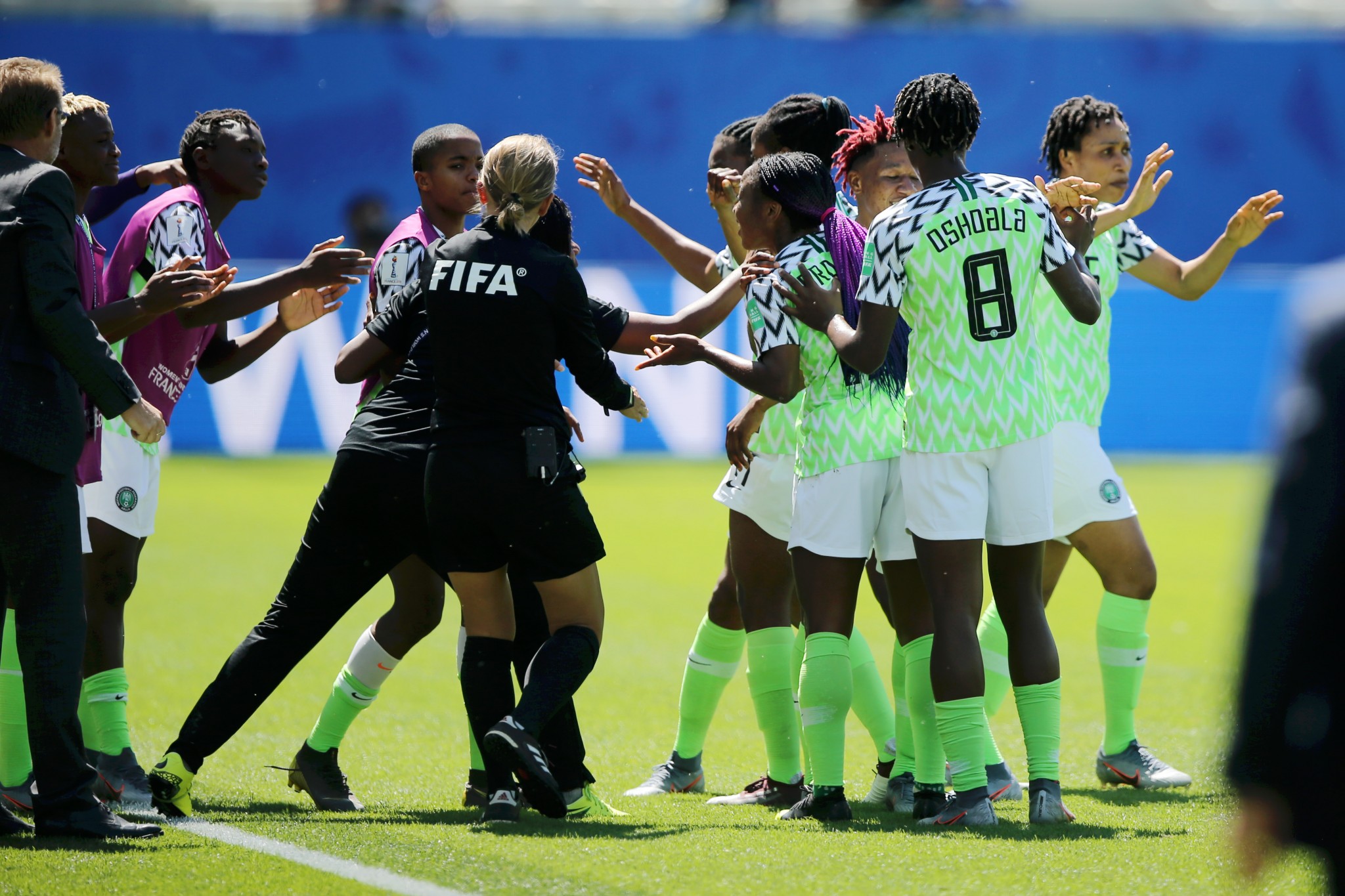 African champions Nigeria did what they needed to do by throwing all they had into the game to defeat Korea Republic 2-0 on Wednesday and earn their first three points of the 8th FIFA Women’s World Cup.

In the event, the Super Falcons set the stage for a fierce encounter with host nation France on Monday next week, as they look to reach the knockout rounds for the first time in 20 years.

Having lost 0-3 to Norway in their first match and realizing they could be heading back home after the group phase, the Falcons opted for a spritely approach against the Koreans. But captain Desire Oparanozie wasted a great opportunity in the 8th minute when presented with a simple header from a pull-out from Ngozi Ebere. She nodded straight at the Korean goalkeeper.

Perhaps the most inspired decision for the game by Nigeria’s coach Thomas Dennerby was starting former junior international Chiamaka Nnadozie in goal and sending Tochukwu Oluehi, so jittery against Norway, to the bench. The 18 year –old goaltender simply continued from where she left off at the 2018 FIFA U20 Women’s World Cup also hosted by France, where she drew some rave reviews.

She cuddled and punched with good judgment, used her long limbs marvelously and stood between the Asians and any goal in the game. Her competence and confidence enabled the Falcons to push forward in search of goals.

After Korean defender Kim Do Yong misdirected a forward thrust by midfielder Rita Chikwelu past her goalkeeper for Nigeria’s first goal in the 29th minute, the Falcons’ spirit soared and they bossed the game for large periods.

Nigeria could have made it two four minutes after the restart, but Oparanozie’s header from a floated free kick by left back Ngozi Ebere went narrowly over the woodworks.

At the back, Nigeria kept things tight against the faster Koreans, with Onome Ebi, appearing at her fifth World Cup, Osinachi Ohale, Ebere and Chidinma Okeke throwing everything in there.

Rita Chikwelu, Ngozi Okobi and Chinaza Uchendu worked hard in the middle. But it was the intelligent right back Okeke, another performer from the 2018 FIFA Women’s World Cup, who got her touches right to send Asisat Oshoala to nick the second goal for Nigeria with 15 minutes left.

As the Koreans attacked, Okobi read the ball well and intercepted, letting Okeke have it and to surge forward. The 18 –year old steered the ball past an advancing Korean and met it at the other end, then weighted her pass to Oshoala, who ran past a defender, beat the goalkeeper and slotted into the net from a rather tight angle. It was a magnificent goal.

The win was Nigeria’s first at the FIFA Women’s World Cup since 2011, when they defeated Canada 1-0 in Germany. It was also the first time they had won a World Cup match 2-0 since achieving the same scoreline against Denmark in the USA in 1999.

It was also the first win for an African team at the ongoing World Cup in France.

The result means three precious points for the Super Falcons, and a real chance of reaching the knockout rounds for the first time since 1999 if they avoid defeat against host nation France in Rennes on Monday.